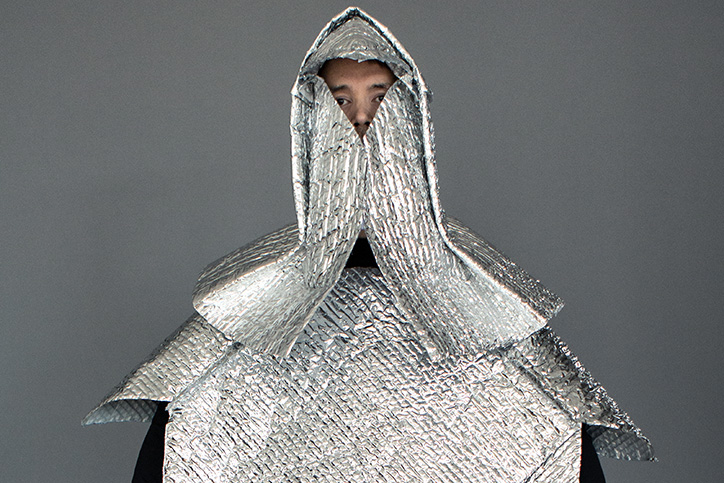 I usually do my own grocery shopping. But, during the COVID-19 pandemic, I tried a delivery service with local produce. Some of it came in these silver insulated bags. As it turns out, they were also delivering the main ingredient for my Halloween costume. Add a roll of tape, scissors, some black clothes, and you […] 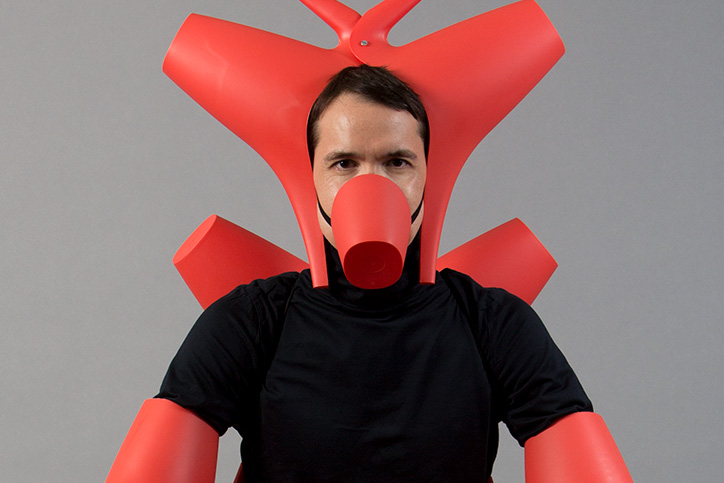 We describe technology as augmenting human capabilities. But other creatures have been way ahead of us for millions of years: sharper hearing, a better sense of smell, protective shells and exoskeletons, weapons (claws, horns, talons), and wings. This costume expresses animal superpowers as we might design them for ourselves. Special thanks to brilliant photographer Willie […] 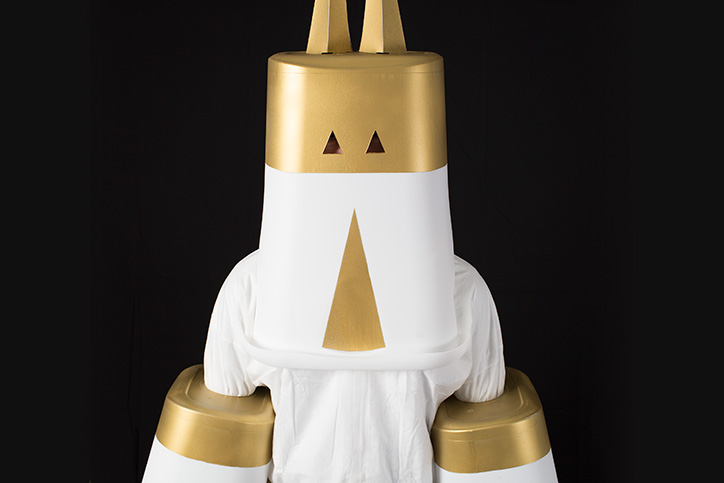 This costume unites garbage and gold. Though the materials are modest (garbage cans), the decorative elements add dignity and beauty through design. I was inspired by gilding on architecture (especially towards the top) and the ceremonial qualities of Japanese samurai armor. Warmest thanks to highly (over)qualified photographer Willie Davis and my favorite stylist Catherine Leung. […] 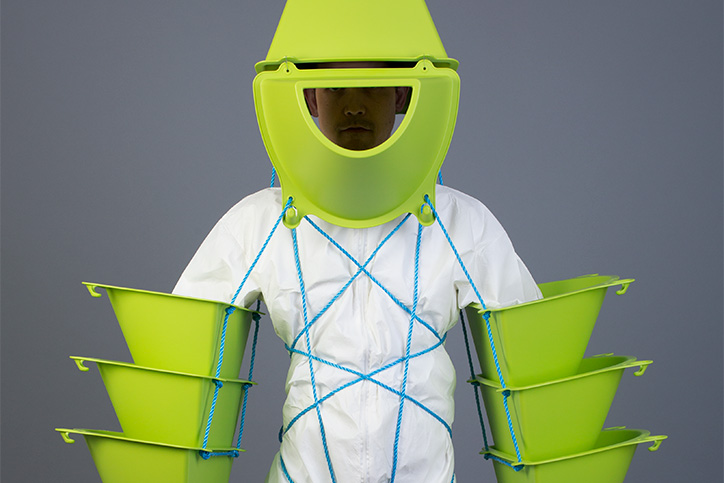 Why not make heroes of those who work in STEM fields? Or better yet, STEAM (Science, Technology, Engineering, Art/Design, Math)? This costume lets us dress up as the action figure we never had. The overall look is inspired by protective suits for scientific research and exploration. Geometric patterns in the rope evoke suspension cables and […] 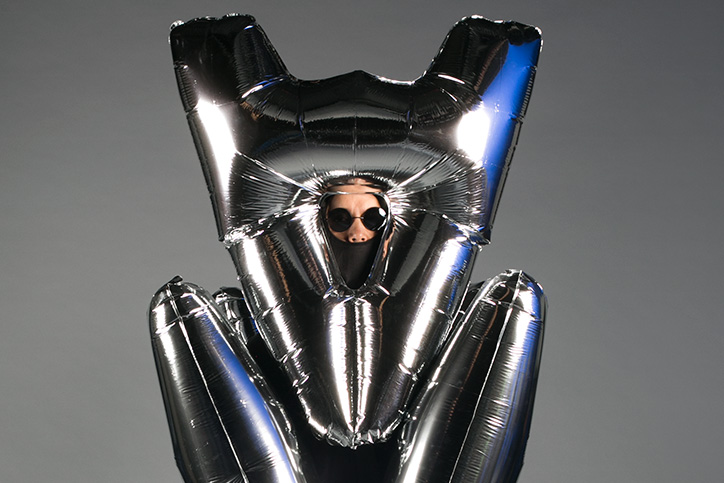 Why wear clothes when you can wear balloons? I used the kind that are shaped like letters: one A, two H’s, and four Y’s. The costume reminds me of balloon sculptures by artist Jeff Koons, and the “stuffed” look of some runway fashion by Comme Des Garçons. Since my costumes are typically geometric, it was […] 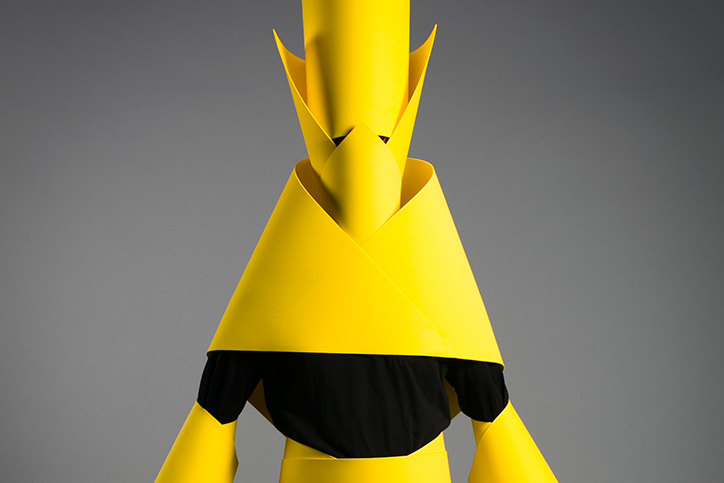 I wanted to experiment with a new material that would allow for curved surfaces. The design is inspired by ceremonial clothing worn by ancient rulers and spiritual leaders. It was also influenced by the structure of leeks, and the snow-ready Stormtroopers in The Empire Strikes Back. Many thanks to expert photographer Willie Davis and talented […] 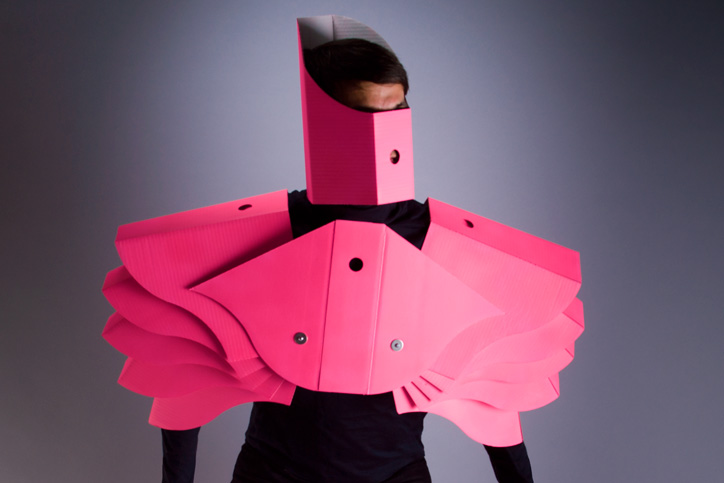 To celebrate ten years of Halloween costume tradition, I designed a matching set (male and female). Both costumes use similar modular components to create different effects. They are inspired by winged armor and helmets worn by the Vikings and Marvel’s Thor character. It was also inspired by winged shoes by Jeremy Scott for Adidas and […] 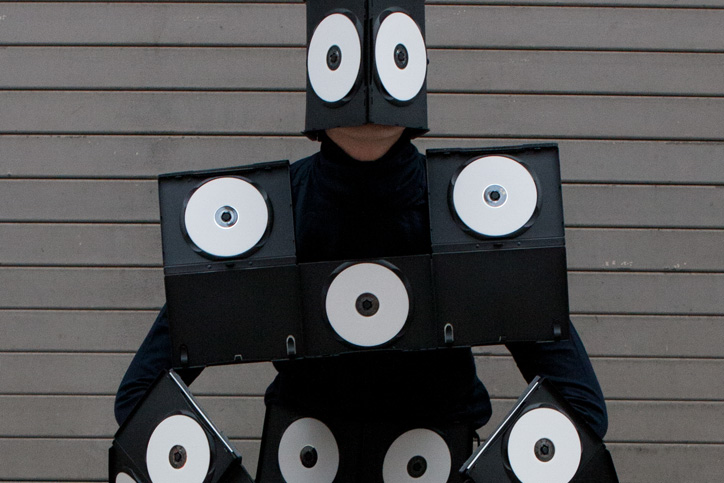 This costume represents the “Death of Discs,” especially CDs and DVDs, and foreshadows the end of Blu-ray and spinning hard drives. It is made of DVD cases and blank DVDs, which are either free or very inexpensive as they approach obsolescence. The concept for this costume came from my Death of VHS costume in 2004, […] 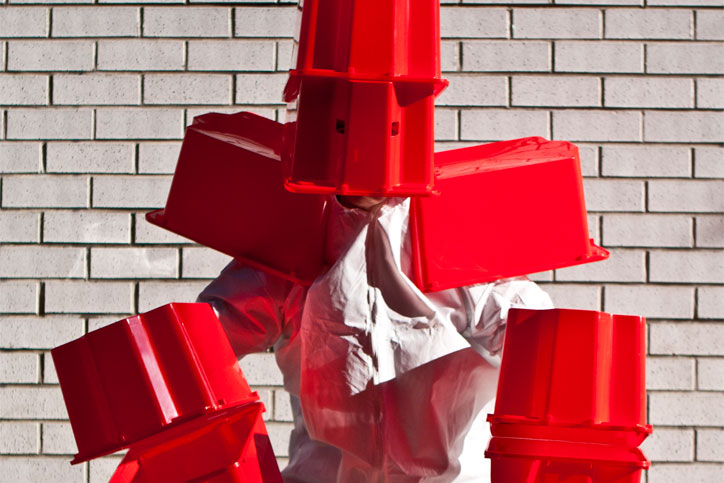 This costume’s features giant scoop-hands are designed for rapid collection of tiny “fun-sized” Halloween candy. It was inspired by construction equipment and the robotic suit Sigourney Weaver wore in the movie Aliens. Other inspiration included fireman’s helmets and old school Transformers action figures. Note that the original costume was red, and the extra colorways were […]

1. Make it yourself.
This is the best way to be original. A store bought costume is better than no costume, but you can do better than that!
2. Use your whole body.
If you wear your usual clothes and throw on a mask, is that really a costume? Go from head to toe.
3. Keep it cheap.
Anybody can spend a zillion dollars on a costume and look cool. The real challenge is making it happen on a budget.
4. Don’t rely on recognition.
Do not dress as a celebrity or a movie character. Standard characters like vampires are off-limits, too.
5. Don’t rely on sex.
Don’t get me wrong – being sexy is great and all. Just don’t rely on it to make your costume work.
6. Don’t rely on horror.
Sure, blood and guts are a Halloween tradition, but don’t feel limited. Take advantage of the day you can wear anything!